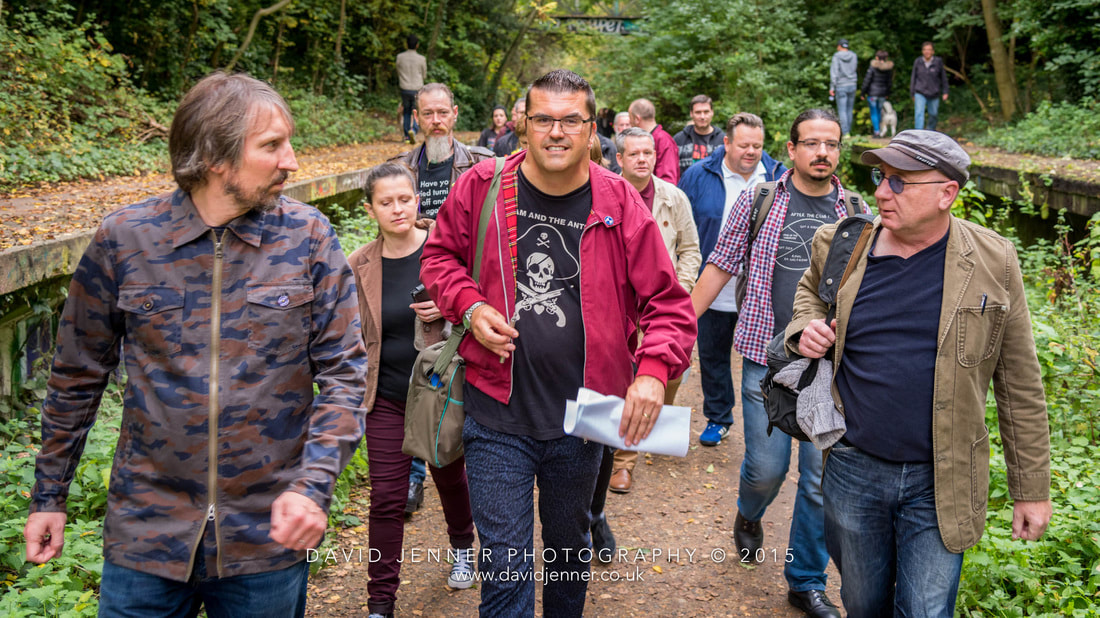 Paul conducts walking tours all over London covering lost music venues, lost rivers and dereliction. To be notified of future dates you can join the mailing list.  Tickets for these walks usually sell out months in advance. All tickets must be purchased in advance via the agency WeGotTickets.

Routes for music tours will include Hammersmith & Shepherds Bush (which also includes a few locations from Minder and The Sweeney), Soho,  Covent Garden and Camden & Kentish Town.

​This guided walking tour in and around the Soho area with Paul Talling, author of London's Lost Music Venues visits the sites of many of the much missed lost venues covered in his latest book dating from the post-war period to the present day. The tour takes you back to Soho's halcyon days of jazz. blues, folk, rock, punk, indie and more. Some venue sites include The 2i’s Coffee Bar, Bag O’Nails, Happening 44, the old Ronnie Scott’s Jazz Club, The Scene, The Establishment, The Flamingo, Wag Club, Gossips/ Gargoyle Club, Le Beat Route, The Limelight, Les Cousins, Madame Jojo’s, The Speakeasy,
3 x Marquee Clubs, the Freight Train Coffee Bar and The Vortex.

In addition, we chat about many other points of interest along the way such as the general history of the area, recording studios, infamous water holes, the Kirsty MacColl bench, sites of record sleeve photos plus some more lost venues covered in the next volume of Paul's book.

The duration of this tour is roughly 4 1/2 hours.This is a real walking tour not a virtual tour!! There will be a pub stop along the way

​​This guided walking tour in and around the Covent Garden area with Paul Talling, author of London's Lost Music Venues visits the sites of many of the much missed lost live music venues covered in his latest book plus a few from the forthcoming second volume.

The tour takes you from the Strand to High Holborn and topics include the Lyceum, Middle Earth, Africa Centre, Bunjies, Saville Theatre, Rock Garden, 12 Bar Club, Gyre & Gimble, The End, Studio 51,The Roxy, the Blitz Club and the last site of the Marquee Club. In addition, we chat about many other points of interest along the way such as a watergate from the days when the Thames was much wider, a street lamp powered by sewer gas, lost ditches, various murders, former drug dens, the location of Bob Dylan's promo for Subterranean Homesick Blues  and the exteriors of a tramway subway closed in 1952.

We meet for the tour at York Watergate which is a historical landmark situated at the back of the Victoria Embankment Gardens. It can be accessed by walking into the Gardens or via Watergate Walk which is at the side of Gordon's Wine Bar. The duration of this tour is roughly 3 1/2 hours and ends near Holborn Station.

​This tour takes you around Hammersmith and parts of Fulham & Shepherds Bush looking at numerous lost music venues and readings from Paul's latest book, various TV locations for The Sweeney &  Denis Waterman era Minder and touching on the 3 lost rivers of the area (Parr's Ditch, Counters Creek and the Stamford Brook).

Just a few of the places covered include the sites of the opening & closing credits for Minder, one of Arthur's lock-ups, Terry Mcann's flat, the former HQ of Euston films, opening credits of The Sweeney, the site of the pub where the cast enjoyed pre/post filming drinks plus bits and pieces including Rik Mayall's Bench in Bottom & the cemetery used for Grandad's funeral in Only Fools and Horses. Plus of course loads of other points of interest from Margot Fonteyn to Aleister Crowley to The Professionals to Joseph Bazalgette.

We pass Opera on the Green where Paul put on an early Manic Street Preachers gig and look at other lost music venues including The Greyhound, The Bottom Line, Hammersmith Palais, Ginglik, Gaumont, the Clarendon/Klubfoot & the Red Cow.